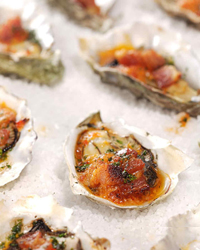 Grilled Oysters Casino is easy to prepare, and according to our resident culinary expert, Betsy Haines, it’s always a big hit! It takes about 15 minutes of prep time and about 15 minutes of cooking time (no more than 10 minutes for the oysters). Have your fishmonger do the “shucking” or see our previously run blog and learn “How to Shuck an Oyster.”

Arrange the oysters on a large baking sheet and refrigerate. In a medium skillet, cook the bacon over moderate heat until crisp, about 5 minutes. Drain on paper towels and cut crosswise into 1-inch lengths.

Melt the butter in a saucepan. Add the bell peppers and onion; cook over moderately high heat, stirring often, until softened, 5 minutes. Season with salt and pepper, Worcestershire sauce, hot sauce (optional) and stir in the parsley. Let cool slightly, spoon over the oysters and top with the bacon.

Light a grill or preheat the oven to 500 degrees. Using tongs, transfer the oysters to the grate and grill over a moderately low fire for 7 to 10 minutes, or until just cooked through. Alternatively, roast the oysters on the baking sheet in the oven. Transfer to a platter and serve at once with lemon wedges.

This recipe can be made through Step 2 and chilled for 5 hours.

The briny oysters and smoky bacon are enhanced by a sparkling wine or a crisp acidic white wine.

See our previously run blog and learn “How to Shuck an Oyster.”

Toi Renee Patterson is the Marketing and Advertising Coordinator for Kitchen & Bath Creations in Columbia, Maryland. Toi is ecstatic with her role at KBC because of the value the company places on its employees and their shared interest in design esthetics. She loves all things related to home design, and functional kitchens in particular. For the past 30 years, Toi has been providing businesses with marketing and administrative support and has enjoyed being involved in many successes. An HGTV fanatic and “wanna-be-designer,” she now has the best of both worlds. With the help of the KBC Team (experienced professional designers), Toi will be sharing ideas that can easily be incorporated into your own home, from clever storage solutions, to “must-have” kitchen accessories, to incredibly tasty and easy-to-make recipes, and more.